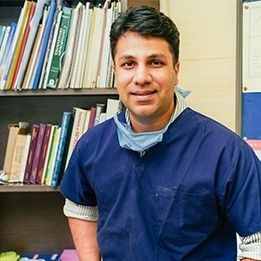 Dr. Vishal Gupta Senior consultant is a BDS, MDS(Gold Medalist), MOrthRCS(EDIN), COI(MANIPAL). Dr. Vishal Gupta graduated with honors from Pune University in 1999. He procured Masters Degree in Orthodontics &Dentofacial Orthopedics with the highest accolades in Postgraduate studies, as he was conferred a gold medal and was adjudged the best outgoing student in the Rajiv Gandhi University of Health Sciences. Following this Royal College of Surgeons, Edinburgh recognized his talent in Orthodontics and bestowed the coveted M Ortho RCS fellowship. Dr Vishal Gupta belongs to a defense background and has done his schooling from the Army Public School, Agra which has helped him immensely in building up a strong character and personality.He started his career in the year 2002 and has been widely associated with PadmabhushanDr Anil Kohli in NewDelhi as a Consultant Orthodontist& Dental Surgeon. Through his early years of practice, Dr. Gupta realized the missing link in dentistry being the awareness in regards to full mouth rehabilitation which led to the advent of Implants. Dr. Vishal is one of first few Orthodontists in India to attain the Fellowship of Dental Implantology from the pioneering College of Dental Surgery, Manipal that gave him greater wings and knowledge in regards to helping restore the complete dental health and wellbeing in his esteemed patients.Dr. Vishal Gupta has been heading the dental department at the leading hospitals in Delhi namely Fortis Escorts Heart And Research Institute And Primus Hospital since 2008 till date and is also visiting many other hospitals of great repute as a Senior Consultant Orthodontist And Implantologist Namely Medanta The Medicity, Apollo Hospital, Metro Group Of Hospitals, Vimhans Hospital.Dr.Gupta is well recognized and respected amongst his peers in the world of dentistry for his immense knowledge and talent, he has been invited at many conferences on the international podium to represent India to learn the newer techniques and advents in the field of orthodontics like Invisalign from Los Angeles in 2008 and Advanced Lingual Incognito System from South Korea in 2010& Advance Invisalign from New York 2015.In 2014, he was invited to be on the editorial board of Orthodontics and Dentofacial Orthopedics for International Association of Dental Research, the USA to represent India for the researches being done in the same field. Also in Dec 2014, he was bestowed with the fellowship of International College of Dentists.Dr. Vishal Gupta is also associated with a lot of charitable institutions and organizations. In 2013, he was made the member of the prestigious Blind Relief Association New Delhi and has been actively participating in all the dental camps and routine dental treatments of kids from the blind school. Dr. Gupta also ardently involves with keeping the general population informed and abreast with the basics & the latest in the field of dentistry respectively by utilizing media via newspaper articles, interviews in T.V & radio etc, he as a dental expert in the field of dental makeover via television wherein he has changed the lives of many poor, socially neglected people who could not afford the treatment charges in the show Extreme Makeover which was aired on National T.V.Dr. Vishal Gupta has organized various dental camps in association with Rotary Club to provide dental care to the underprivileged. He provides free dental treatment to an NGO named Sanskriti International. He is also associated with an NGO in Himachal Pradesh and is working towards spreading dental awareness and treatment among the poor section of society.